Perched on the edge of the Andaman Sea is Datai Bay: a long crescent of pristine, sandy beach. Located at the northwest tip of Langkawi, Datai Bay was featured in National Geographic's Top 10 Beaches in The World, and is widely acknowledged as one of the island's most beautiful and unaltered beaches. Once at the beach, visitors need only look ahead to see the tiny island known as Pulau Anak Datai atop clear turquoise blue waters. 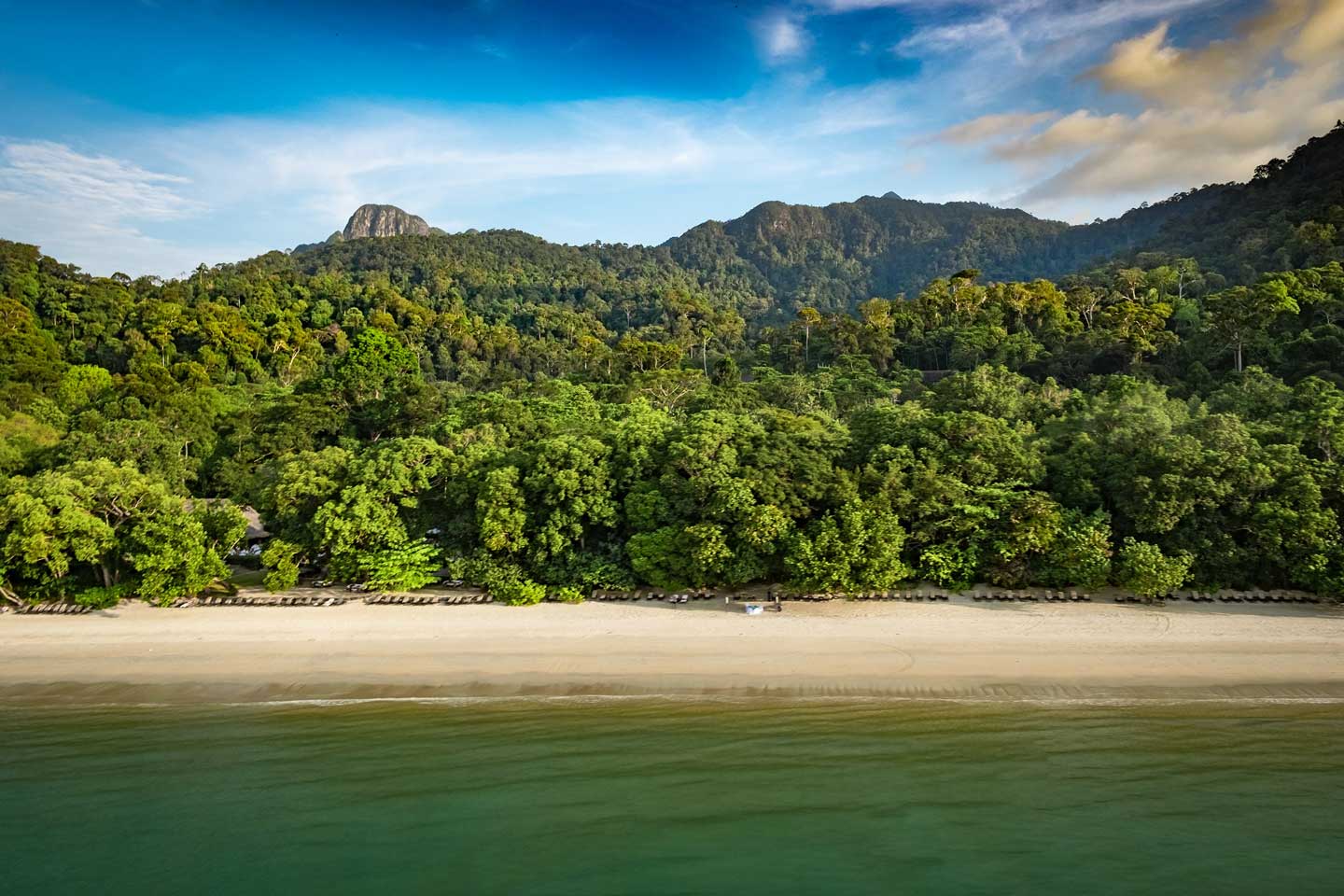 Stretching 1.5 kilometres in length, the white beach merges with the lush foliage of a 500-hectare rainforest. This rainforest forms the base of Gunung Mat Chinchang, an 850-metre-high mountain that cocoons Datai Bay. Formed some 500 million years ago, it stands as the oldest mountain in all of Southeast Asia, and is a UNESCO World Heritage Geopark. Many exotic species, such as dusky langurs, colugos, hornbills, and some 530 different species of butterflies, call the rainforest at the foothills of Gunung Mat Chinchang home.

Datai Bay, known locally as Teluk Datai, is a 40-minute drive from Langkawi International Airport and a 50-minute drive from the tourist-friendly areas of Pantai Cenang and Pantai Tengah. The Datai Langkawi Resort is in the immediate vicinity, and offers both a five-star experience and exclusive access to the indescribable beauty of Datai Bay.

Datai Bay is known for its richness in marine life and the ineffable beauty of the coral reefs that can be found there. Indo-Pacific humpback dolphins are also known to frequent Datai Bay in search of food, often showcasing their acrobatic abilities by leaping and breaching out of the water. Visitors of Datai Bay are encouraged to keep a lookout for them, as watching dolphins in the wild provides one a wonderful experience.

Langkawi is easily accessible by air from Kuala Lumpur, Penang and Singapore via major carriers such as Malaysia Airlines, AirAsia, Firefly, Malindo Air, SilkAir and Tigerair. A quick one-hour flight from Kuala Lumpur, or 1 hour and 35 minutes from Singapore.

Langkawi is also well connected by sea. Visitors from Penang can board ferries at Kuala Perlis, Kuala Kedah and Georgetown. Visitors from Thailand may also depart via ferry from Satun or Koh Lipe.

FIND OUT MORE ABOUT LANGKAWI ISLAND